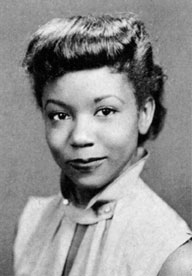 When Millard and Guthrie Jefferson decided to have their one and only child, they must have hoped, like all new parents, that many opportunities lie ahead for him or her. As part of the exclusive fraternity of parents, a universal hope is that you can provide more for your child than you had for yourself. Along with this, you hope to leave them with a better world than you had when you first entered.

But the chance to achieve greatness, or even minimal prosperity, must have seemed slim. This was East Texas, circa 1926. A young, black couple in the Jim Crow South about to give birth to a baby girl. But Millard, a Methodist minister, and Guthrie, a school teacher, did not bank their lives on chance, but faith. Black families in these parts were centered around traditional values. And despite the challenges, many black families stressed the centrality of family, work, and education.

This was what I believe to be the driving force behind the success of their daughter. Her name was Mildred Faye Jefferson. Mildred was born on April 4, 1926, in the East Texas town of Pittsburg. Her family lived in Carthage, TX, which is where “Millie” (as she was called by those that knew her) was raised and spent most of her youth. It was said that Millie knew from a young age that she would become a doctor when she grew up. She was known to have followed the town doctor around on his horse drawn buggy. The doctor would take the time to answer her questions. And when she told him that she would be a doctor some day, he replied, “if that’s what you want to do, then you go right ahead.” The doctor was probably being kind to her. But doctor she would be; but not before some amazing scholastic achievements along the way.

Mildred graduated from public high school in Carthage at age 15. She then went on to graduate from Texas College, an historically black school in Tyler, Texas. She was just 18 years old when she received her degree from the college that was affiliated with the Christian Methodist Episcopal Church.

Since she was too young to enter medical school, Mildred attended Tufts University in Medford, Massachusetts, where she went on to get her Master’s Degree in Biology. Having finally reached the age at which she would be considered for admission, Mildred Fay Jefferson had reached the crowning jewel of her academic life, and what appeared to be her purpose from early in her youth: acceptance into the highly prestigious Harvard Medical School. And just two short years after the school had admitted it’s first woman, Mildred became the first black woman to graduate (1951) from what many considered the finest institution of higher learning in America.

From there, with all of her academic achievements attained, Mildred would lay claim to many more in her career in the medical field. After completing her medical studies, she became the first female surgical intern at Boston City Hospital. Following her residency, she moved on to Boston University Medical Center. As an assistant clinical professor of surgery, Dr. Mildred Fay Jefferson would become the first black woman to be elected as a member of the Boston Surgical Society. Finally, while becoming the first female doctor at Boston University Medical Center, she was also one of the first woman certified by the American Board of Surgery. Pretty astonishing accolades for a young woman from a small town in East Texas!

“I am at once a physician, a citizen, and a woman, and I am not willing to stand aside and allow this concept of expendable human lives to turn this great land of ours into just another exclusive reservation where only the perfect, the privileged, and the planned have the right to live.”  —   Dr. Mildred Jefferson

Mildred enjoyed a successful career as a surgeon and lecturer. She bought her parents their own house. She married. She traveled abroad. She had become a trailblazer, a pioneer; not only as a woman, but a black woman that had accomplished what no other in her race or gender had to this point in history. And that would have been more than enough, thank you, to place her firmly in the history books. But Dr. Jefferson, being a woman of faith and conviction, could not ignore an emerging issue that would cause a great divide across the entire medical profession.

By 1970, the American Medical Association at its annual meeting had enough votes to pass a resolution liberalizing its position on abortion. They had collectively decided that it was no longer unethical for a physician to perform abortions if the procedure was legal in his or her state. This was distressing and unacceptable to Dr. Jefferson, who believed that it violated the oath that they had taken as doctors to protect life.

So Jefferson turned her attention to reversing this decision and joined a group of like-minded physicians. But the political tide moved against them as they were unsuccessful in their bid. Meanwhile, an abortion battle was brewing in Dr. Jefferson’s home state of Texas. This battle would soon reach the highest courts in the Land as the infamous case of Roe vs. Wade.

Later in 1970, Dr. Jefferson co-founded Massachusetts Citizens for Life, with the National Right to Life Committee (NRLC). By 1971, Mildred was on the Board of Governors for NRLC. She wasted no time in becoming a voice for the unborn by giving speeches throughout the country. “I became a physician in order to save lives, not destroy them,” Dr. Jefferson would say.  She soon became known for her articulate and eloquent speaking. And in doing so, she drew the attention of some very high profile names in government.

One of them was the governor of California. This was a portion of the letter she received:

“I hope you won’t mind my writing to you, but I had to tell you how truly great you were in your testimony on the “Advocates” program regarding abortion. Yours was the most clear-cut exposition on this problem that I have ever heard. . . . Several years ago I was faced with the issue of whether to sign a California abortion bill. . . . I must confess to never having given the matter of abortion any serious thought until that time. No other issue since I have been in office has caused me to do so much study and soul-searching. . . . I wish I could have heard your views before our legislation was passed. You made it irrefutably clear that an abortion is the taking of a human life. I’m grateful to you.” – Letter addressed to Dr. Mildred Jefferson from California Governor Ronald Reagan.

Former governor and 40th president of the United States, Ronald Reagan, had made the mistake (by his own admission) of signing the controversial Therapeutic Abortion Act into law in early 1967. Reagan’s guilt from signing this destructive piece of legislation lead to him becoming a strong pro-life advocate by the time he was president. He credits Mildred Jefferson in large part for raising his awareness on the issue.

Mildred saw her role and the fight against abortion on demand as moral objective. “I’m opposed to abortion as a doctor and also because I know it is morally wrong. An individual never has the private right to choose to kill for whatever reasons, be they whim, convenience or compulsion. Because I know abortion is wrong, I will use every means available for free people in a free country to see that it is not perpetuated.“

By 1973, Mildred was named Vice-chair of the NRLC. In 1975, she became president of the organization, and served in this capacity until 1978. Though she ran for Senate in Massachusetts on three occasions (’82,’90,’94) unsuccessfully, her accomplishments and influence as both a physician and advocate for the unborn were her crowning achievements.

Before her passing in October 2010, Mildred Fay Jefferson, in addition to her many accolades, received no less than 28 honorary degrees. She had earned the respect of many in her profession, leaders in government, and especially those whom have fought so hard to reverse the trend of abortion-on-demand in our nation. Certainly we have seen that trend reverse in recent years. And we have her to thank in part for this.

When I look back at the life of Mildred Fay Jefferson and see what she had become, I can’t help but think of her humble beginnings back in East Texas. The values of traditional family, which includes making family first, working hard, and getting an education to better yourself. The faith that was foundational to her decision-making as a professional and a leader. The unwavering support of her parents as demonstrated through relocating to Massachusetts while Mildred awaited her chance to attend medical school.

But what was more amazing to me than all her accomplishments, was the selfless path she chose and remained stalwart in purpose and undeterred, though the outcomes did not always result in victory for her cause. She could have rode the wave of the women’s movement to achieve greater fame, as she remains a somewhat hidden figure. And with her good looks and impeccable speaking ability, she could have chosen a path that would have provided her with greater fortune. But Millie took the road less traveled. She gave a greater voice to the voiceless. It did not make her rich beyond her wildest dreams. But what it made her was an immortal voice for a cause that needs one. And how many children are here because Mildred Fay Jefferson chose to speak up for the unborn? We may never know. But I sure am glad that as a little girl she chose to follow the town doctor with his horse & buggy. It just goes to show the power of each life to influence another is immeasurable, yet beautiful beyond words.

(Chris Gaines is an author and Editor-in-Chief for Patriot Gaines. He resides in the Cedar Valley of Northern Iowa with his wife, Jen, and two kids, Patrick & Megan.)